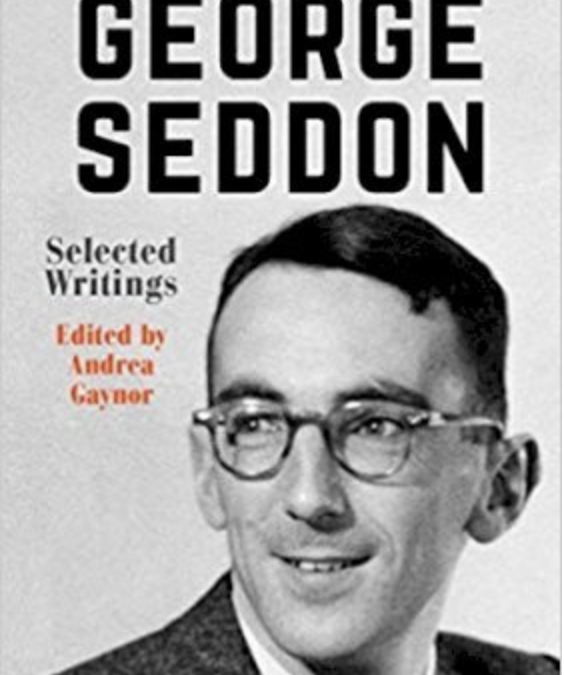 For what would Perth be remembered, if it were abandoned? Would it make a good ruin? It has always seemed to me an exceptionally vulnerable city …(293).

My sense of place was disturbed by the recent Australian bushfires; it raised questions again about country and how we use and abuse it, also about how we might be able to approach it sustainably. This kind of thinking is George Seddon terrain. Seddon is particularly well known for Sense of Place (1972), but he wrote ten other books in his life time, all in his unique, scholarly, conversational and literary style.

George Seddon: Selected Writings, edited by environmental historian Professor Andrea Gaynor, includes essays written from 1972 to 2005 on the themes of environmentalism, gardening and environmental consulting. Gaynor’s selection of essays allows us to have a conversation with Seddon over the course of his life. Even though an apparent voice from the past, Seddon’s essays ask the big questions. Has our world really become complicated? Or is that just a perception? Can conservation only be achieved through a totalitarian State? Why do we anthropomorphise? What does Nature mean? How does ‘the relation of man to man’ direct our destruction of Nature? Seddon may appear too aesthetic at the expense of deeper environmental concerns, but, as Gaynor argues in her Preface, what Seddon offers is ways to approach and meet landscape that are ‘both functional and beautiful’ (viii).

Seddon was born soon after World War I, and while that now frames his ideas with the politically incorrect lens of the anthropocentric and patriarchal, it does not distract from his seminal environmental message. Seddon’s essays provide hope and salve to our climate change times, and reveal ways to seed new possibilities within our neoliberal environ. Seddon worked across many disciplines, but his two consuming passions were landscape and language. His essays take us back to our everyday roots and importantly provide views of our moral and custodial responsibility. While Seddon doesn’t grapple with climate change or Indigenous reconciliation, this book of essays provides a fantastic introduction to Seddon’s work and ideas for all readers, activists, gardeners, industry and Government.

The ‘Classic’ section of the book focuses on the environment and starts with his most famous essay and phrase, ‘Sense of Place.’ This is certainly one of my favourite essays. It had me connect to the power of understanding the Natural world I live in—its intimate and local, scientific and creative history. When Seddon arrived in Perth in the ‘70s he disliked the landscape, so he sought to understand it.

The early Classic essays in this edition were predominantly written in the ‘70s. These essays include: Seddon’s critique of the environmental movement and his direction for a new ethics of ecology inclusive of obligations to land; his step-by-step guide to landscape architects on how they can preserve the genius loci—protective spirit—of a place; his thesis on how the ‘country town model’, that involves the whole community, might serve as the most effective model of social action. He explores the potential of environmental history to provide multidisciplinary insight into land management, and how Snugglepot and Cuddlepie familiarised Australians with their environment. An inquiry into ‘The Nature of Nature’ has him wondering if our being part of it has problematised our ability to be responsible for it.

In the ‘Gardens’ section Seddon’s essays considered everything from the philosophical origins of garden design aesthetics, to a review and praise of the exceptional eighteenth century rendering of the tropical garden in the Melbourne Royal Botanic Garden. A series of essays explore the birth of the suburban garden in Australia. In a 1997 essay, he interestingly claimed that gardeners were one of the most important groups of land managers in this country, representing 50% of all urban land, that carried 80% of the population. Yet, he decried, most were not managing the land in an ecologically responsible way (227).

In the last section, ‘The art of advising’, the essays include excerpts from consultancy reports, memos to Industry, and articles. Seddon showcases his thoroughness, how he would take years to understand the landscape through private tours; his diplomacy and goal to identify environmental problems and seek solutions and costs. These excerpts provide fantastic models for anyone working on large projects impacting landscape at a Government or industry level and include extracts from projects such as the Southern Mornington Peninsula, Victoria assessment (1974), the proposed Loy Yang coal field development, Victoria (1975), an article first published in UNESCO Review (1981), an integrated open space system with city and rural development (1977).

Seddon was a conservative who opted to work within the system rather than buck it. And yet he had incredible out-of-the-box insights still pertinent to our times. He shows how one person can make an enormous difference. In an Australian university system that is shrinking its intellectual pool, he reveals how intellect, heart, and creative resourcing of the arts can be synthesised to plant new seeds for sustainable futures. In our world which requires radical change, Seddon is proof conservatives are not to be dismissed and that a multidisciplinary approach is the best way to imagine sustainable futures for humans and non-humans.

At best, our rights are custodial. True possession must be earned: that is possession by the imagination. (108)